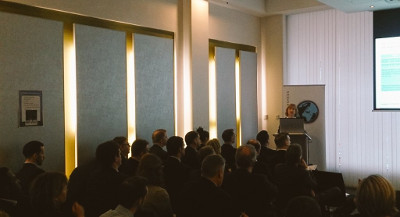 The potential implications for Ireland of a British exit from the EU were explored at a special briefing held by Dublin Chamber of Commerce and international law firm Eversheds this morning.

Gina Quin, CEO of Dublin Chamber, used the event to reveal the results of a recent survey of Irish businesses.

After surveying 308 businesses, Dublin Chamber found that 47 per cent of Irish businesses thought Brexit would have a negative or very negative impact on them while only 5 per cent expected a positive impact. 48 per cent anticipated a neutral impact.

Ms Quin said: “Although difficult to quantify what the full macro-economic effects of a Brexit would be, this survey shows that Irish businesses are concerned about the potential impacts.”

Ros Kellaway, global head of the EU, competition and regulatory practice at Eversheds, also spoke at the event.

Afterwards, Ms Kellaway told Irish Legal News: “Eversheds was there to explain what the renegotiated deal means and what a Brexit would or could look like from a legal perspective.

“It was really about explaining the nature of the UK’s membership now, which is quite a special kind of membership with some special opt-outs that other member states don’t have, and how the renegotiation had built on those opt-outs to try to meet some of the objections there are in the UK to our membership.

“Then I looked at what it would mean if there were a vote to leave on the 23rd of June, and the different sorts of agreements or arrangements that might be arrived at in the event of an exit.”

“For example, you can’t have a separate trade agreement between the UK and Ireland because the common commercial policy is the exclusive competence of the EU, so Ireland can’t negotiate a separate trade deal with the UK.”

Eversheds is neutral in the referendum but is working with a number of firms to create contingency plans in the event of Brexit.