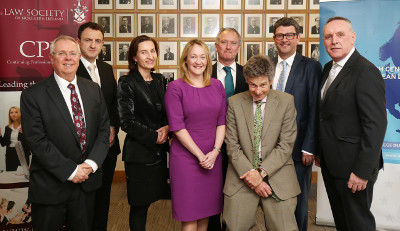 Over 120 legal professionals and academics discussed a prospective British exit from the European Union (EU) at an event hosted by the Law Society of Northern Ireland.

The conference, organised in conjunction with the Irish Centre for European Law (ICEL), addressed the implications of Brexit and its real impact on Northern Ireland’s economy, legal profession, citizen’s lives and issues surrounding human rights.

The discussion was opened by Michael Robinson, head of the UK delegation to the Council of Bars and Law Societies of Europe (CCBE), and Judge Anthony M. Collins of the General Court of the EU in Luxembourg.

Brian Doherty, former solicitor with the Departmental Solicitors Office, spoke about the effects of Brexit on the operation of devolution under the Northern Ireland Act.

In his presentation he noted how Brexit matters more to Northern Ireland than rest of the UK. He concluded by quoting Sir David Edwards: “The long term consequences of Brexit are certainly unimaginable.”

Barrister Margaret Gray offered attendees her insight in the “Commercial considerations and the Single Market in an all-island setting”. She observed the benefits for Northern Ireland of staying within EU as being EU funds, single market access, services and benefits to consumers.

Laura Gillespie, partner at Pinsent Masons in Belfast, gave a presentation on “Practical Implications for Lawyers in a Post-Brexit landscape”.

Professor Colin Harvey, professor of human rights at Queen’s University Belfast, concluded the conference with his overview of the “Constitutional guarantees - remain and Leave scenarios”.

Commenting on the conference, John Guerin, President of the Law Society, said: “Undoubtedly there are significant issues surrounding Brexit most notably the impact of the possible exit on the legal profession, the economy and Northern Ireland in general. It is important to encourage debate and discussion as we move closer to the referendum on the 23rd June 2016.”