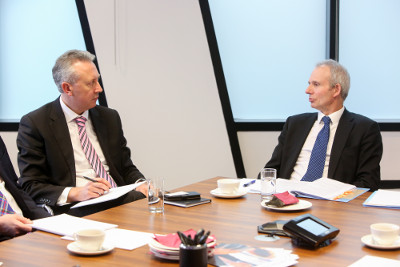 The UK government’s Minister for Europe took part in a discussion about Brexit at an event hosted by Pinsent Masons.

Held under the Chatham House Rule, the event was attended by people across banking, construction, public relations, accountancy and business consultancy sectors, and the select grouping enjoyed an in-depth discussion with a key Whitehall minister.

Paul McBride, head of the firm’s Belfast office, said: “As the only international law-firm serving the Northern Ireland market we were delighted with the opportunity to facilitate such extraordinary engagement with the Minister.

“Northern Ireland is the only region with a land-border with a fellow EU member, so the outcome of the EU referendum will be of profound importance. The Minister’s portfolio is at the heart of that debate and so those attending will certainly have made their views clear on the issue.”