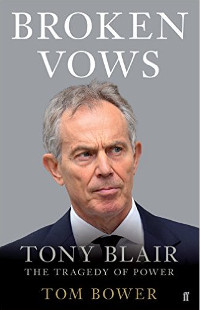 Tom Bower is a barrister turned investigative journalist, a species that is all but extinct in modern Britain. He has produced a string of debunking biographies of the rich and famous and has successfully defended libel actions from the likes of Richard Branson, Robert Maxwell and Richard Desmond. Media tycoon Conrad Black had to freeze his action against Bower when he was convicted of fraud and imprisoned in Florida.

Little wonder then that his biography of Tony Blair was eagerly awaited. He has not disappointed. With Bower’s customary forensic attention to detail, he presents a portrait of a flawed politician uneducated in the ways of Government and with very little grasp of history (Blair knew nothing of the Wilson Governments or of Wilson’s rebuttal of Lyndon Johnson’s request to send troops to Vietnam — a response Blair would have done well to emulate when he became engulfed in Mesopotamian madness).

Written more in sorrow than in anger,  as Bower had been a Blair supporter, the book pays tribute to Blair’s communications skills and intelligence but regretfully concludes that he was a charlatan with a messianic degree of self belief. Tellingly, Blair now says that one of his biggest regrets is the introduction of the Freedom of Information Act and, of course, his activities in advising some of the more odious of the world’s regimes are shrouded in secrecy with Blair contracts famously including dozens of confidentiality clauses.

Prophets, it is said, are rarely honoured in their own land and this, it now seems, extends to those who think they are prophets. As Blair frantically prosecutes the Blair Rich project he has indeed become a tragic figure.